In 1621, an Angolan named Antonio was captured by an enemy tribe and sold to an Arab merchant who eventually sold  him to the Virginia Company. The company was chartered in 1606 by King James to grab land in Virginia and propagate Christianity and it was the Virginia Company that established the Jamestown colony. It was during the initial settlement of Jamestown that the myth of John Smith and Pocahontas was created. After the initial hiccups, where they had to resort to cannibalism, the colony had survived. 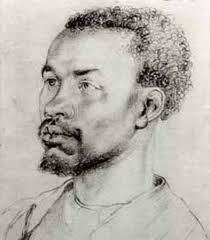 In Virginia, Antonio worked as an indentured laborer and after a period of time — after he had paid off his dues — he was freed. His wife, Mary, too was freed and as was normal for free indentured people, granted land.  Thus, 20 years after he arrived in Virginia, he took the name Anthony Johnson and became the owner of a 250 acre farm with his own servants. Thus an African man becoming a landlord himself may look unusual, it was not odd because slavery was not codified during this period. Though African slaves were present in Jamestown few years at least a decade after its founding, people like Anthony Johnson could buy their freedom and become property owners.

During this period, there was not much of a difference between the White indentured servants and Africans; the difference between slavery and indentured servitude was fuzzy. The slaves and servants would revolt and run away together. Initially the colonies had more indentured servants consisting of poor English folks who were willing to risk everything for a prosperous life. Though the Africans formed less than 5% of the population in Virginia, they were more balanced in gender and age while the indentured Whites were mostly male. The Africans had families and since there was no ban on interracial marriage, free blacks even married Englishwomen. They were also able to court to settle disputes. In this early phase, Virginia was a society built by slaves and servants, but it was not a slave society.

By the 1660s, there was a demographic shift. There was a decline in servant population.  The mortality rate began to drop and the White population started increasing and more African slaves were required. According to the Slave Trade voyages database, while Virginia imported a hundred slaves from Africa in the period 1628 – 1650, that number increased to 4754 in the fifty year period after that. To concentrate the powers among the landowners, only the landed were allowed to vote. In one instance, one governor even banned general elections for 15 years.

There were two events that happened which caused a dramatic shift in how the slaves and servants were viewed. The first was passing of the Enactment of Hereditary Slavery Law Virginia in  1662 and the second, the Bacon rebellion of 1676.

Under English law, a child received his or her status from the father. The new  colonial law of 1662 made the child of an enslaved mother also a slave for life. Thus this race making piece of legislation ensured that reproductive capacity of the African women was used to feed into the slave system. Slavery was thus codified on the woman’s body. This also made sure that even if the father was one of the English slave owners, their child would still be a slave.

The rebellion of Nathaniel Bacon started when he wanted a commission to fight the native Americans to kill them and drive them off the land. The governor declared him a rebel, but Bacon was resourceful. He built an army with slaves and servants and plundered the region. They took control over Jamestown and burned it to the ground. The rebellion had a surprise ending when Bacon died of dysentery and the armed vessels returned regaining control. This incident showed Virginia’s elite that the slaves were a politically unstable and a dangerous force.

Soon the slave code was enforced by singling out people of African descent from the Christian white servants.  Free blacks were stripped off their rights  and the rights to marriage. A master had the right to “correct” a slave, and if the slave died during the “correction” process, he would be acquitted. A similar experiment was carried in the English colony of Barbados earlier and the concept of Whiteness and Blackness had been introduced. Due to similar changes, the slave category was codified into law and by the first quarter of the 18th century, Virginia had become a society of slaves.

(Based on the lectures of Prof Stephanie McCurry, University of Pennsylvania for the course History of the Slave South at Coursera)

Related posts brought to you by Yet Another Related Posts Plugin.