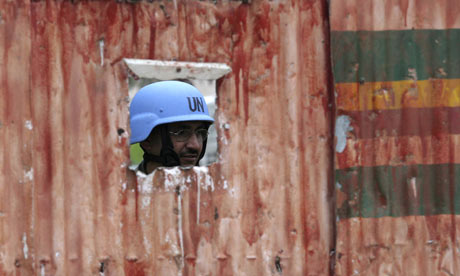 On Friday, India will use its month-long presidency of the United Nations Security Council to convene a discussion on the state of peacekeeping.  This is timely, as UN operations have been through a turbulent year, navigating crises in Côte d’Ivoire and Sudan.  There is talk of a new mission in Libya.  But this meeting is likely to be a bore.

UN-watchers have long viewed India as a pivotal power in debates over peace operations.  Indian troops and policemen represent nearly a tenth of the 100,000 uniformed personnel under UN command today.  Other rising powers, including Brazil and China, make significant contributions to blue-helmeted missions too, outstripping most Western nations.  But India, a big player in these missions since the 1960s, should be the leading source not only of personnel but also of ideas on how to boost the UN’s performance.

Such ideas are urgently needed at present.  A rapid survey of current UN operations is disheartening.  The two largest missions – in Darfur and the Democratic Republic of Congo – are trapped in quagmires.  That in Darfur especially seems to have neither the military nor political means to resolve the humanitarian crisis it is meant to alleviate.

Many smaller missions are caught in similar traps.  Operations that were meant to last a year or two now stretch on interminably.  It is unclear, for example, when the UN will be able to exit trouble-spots like Haiti and Côte d’Ivoire without risking renewed violence.

Nobody likes this situation.  Governments that supply troops and military assets to the UN such as India ask if they are serving worthwhile political strategies.  Those governments that cover the UN’s costs – the U.S., Japan and EU members – grumble about the $8-billion-a-year price-tag.  Dedicated UN officials are frankly demoralized.

And yet some strategists see the UN’s commitments increasing over the next ten years.  American commentators in particular wonder whether UN forces could substitute for NATO troops in Afghanistan in the years ahead.  More immediately, it’s conceivable that both Libya and Syria will need some sort of peacekeeping presences to achieve stability.

It is very difficult to see how the UN can both sustain its current operations in places like the Congo and take on new missions across the Middle East.  There is an urgent need for serious inter-governmental talks on how to either lighten the UN’s peacekeeping load responsibly (by, for example, handing off some of its lower-risk operations to regional organizations like the African Union) and how to reinforce its highest-profile missions.

India is positioned to act as an arbiter in these discussions.  It is traditionally aligned with smaller troop contributors to UN missions from Asia and Africa, but as a member of both the Security Council and G20 it has the to status parley with other big powers as an equal.

Unless India’s diplomats at the UN have surprises up their sleeves, they will not take advantage of this status on Friday.  A background paper prepared for the Security Council’s meeting contains a solid but all-too-familiar litany of diplomatic statements about how peace operations are resourced and managed.  It fails to grapple seriously with the hardest cases facing the UN or offer a serious framework for resolving them.

There are excuses.  It’s August.  Security Council diplomats will be thinking of how to beat the traffic from New York to Long Island’s beach resorts once the debate is finished.

But India has soldiers on the frontlines of UN peace operations who don’t have the luxury of a weekend on the beach.  As a power on the world stage it also has an interest in showing that it can lead in fixing the UN peacekeeping system.  Policy-makers should look beyond Friday’s debate to find real ways to restore that system’s fading credibility.

Richard Gowan is Associate Director at New York University’s Center on International Cooperation and a Senior Policy Fellow at the European Council on Foreign Relations.