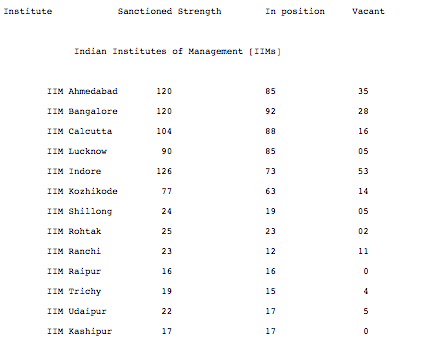 In the course of a twitter discussion yesterday, journalist Mathang Seshagiri quoted numbers from a parliamentary reply by the ministry of HRD (on the 24th of November 2014) on the sanctioned faculty strength and vacancies in “institutes of national importance”. While his purpose was to primarily show that even the older IITs and IIMs have massive vacancies, what struck me was the sanctioned faculty strength of the newer IIMs. Here is the picture posted by Mathang:

About ten years back, when I was a student at IIM Bangalore, I had gone for an event where I met someone from another business school in Bangalore whose name I can’t remember now. During the course of the conversation he asked me how many electives he had. I replied that we had about 80-100 courses from which we had to pick about 15. This he found shocking for in his college (from what I remember) there were only three or four electives!

The purpose of an MBA is to provide broad-based education and broaden one’s horizons. Thus, after a set of core courses in the first year (usually about fifteen courses), one is exposed to a wide variety of electives in the second year. It is a standard practice among most top B-schools to fill the entire second year with electives. In fact, in IIM Bangalore, electives start towards the end of the first year itself.

With 20 faculty members, there are only so many electives that can be offered each year. For example, in the coming trimester, IIM Bangalore is offering students (about 400 in the batch) a choice of about 40-50 electives, of which each student can pick four to six. This gives students massive choice, and a good chance to tailor the second year of their MBA and mould themselves as per their requirements.

By having 20 faculty members, the number of electives that can be theoretically offered itself is smaller (given research requirements, most IIM professors have a requirement to teach no more than three courses a year, and they have core and graduate courses to teach, too), which gives students an extremely tiny bouquet of choices – if there is any choice at all. This significantly limits the scope of what a student in such a school can do. And the student has no option but to accept the straitjacket offered by the lack of choice in the school.

In the ensuing twitter conversation this morning, Mathang contended that it is okay to have a faculty strength of 20 in schools with 60 students per batch. While this points to an extremely healthy faculty-student ratio, the point is that for broad-based education such as MBA, faculty-student ratio is not a good metric. What makes sense is the choice that the student is offered and that comes only at scale.

Thus, the new IIMs (Shillong “onwards”) are flawed in their fundamental design. It is impossible to run a quality business school with only 20 faculty. One way to supplement this is by using visiting faculty and guest lectures, but some of the new IIMs are located in such obscure places (where there is little local business, and which are not easily accessible by flight) that this is also not an option.

Merging some of these smaller IIMs (a very hard decision politically) might be the only way to make them work.